Motion pictures have moved us and shaped our society since the early 20th century. The Film and Media Studies program offers critical study of moving image culture – its history, theory and criticism.

As a film and media studies major, you will develop an array of critical skills necessary for actively interpreting and productively engaging film and media culture from essential media literacy skills to advanced research methods in historical and textual film and media analysis.

By working closely with program faculty, you may also undertake undergraduate research on almost any aspect of media culture — from early Hollywood to contemporary Asian cinema and European television, from home movies and experimental films to selfies and social networks, from problems of industrial organization to questions of genre development and social habit. You will pursue additional skills through your minor.

As a film and media studies major, you will also have the opportunity to get involved in Columbia's local film culture, which is anchored by the Nickelodeon Theater and Film Society and its unique media literacy programs, part of the Helen Hill Media Education Center. You may choose to volunteer, intern or even work at the theater or center to gain experience in film programming, film festival operations and the teaching of media literacy skills to young people.

B B.A. in Film and Media Studies

The Film and Media Studies Program has grown steadily since the major was unveiled in 2001 and has quickly become among the most popular of interdisciplinary majors in the College of Arts and Sciences. Devoted to the critical study of moving images, the program also offers coursework in film and media productions.

The following courses fulfill some of the requirements for a major in film and media studies:

Our Office of Undergraduate Admissions provides the most current information on the application process so you can check the requirements based on your current status and find university scholarships.

6,000hours of film and television archival content in the Moving Image Research Collections.

A major in film and media arts can prepare you for careers in:

VIEW ALL AREAS OF STUDY » 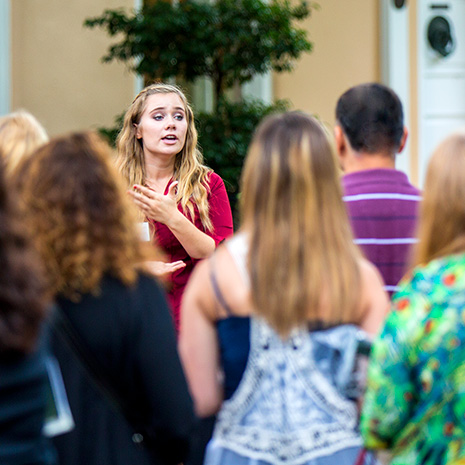 Starting at the Visitor Center, our student ambassadors guide you on a walking tour of the University. These current students can answer your questions while they give you a closer look at our historic campus.